If you are a circle leader, you will be responsible for making sure that all the people in the circle have access to the workspace. This is how to do it. 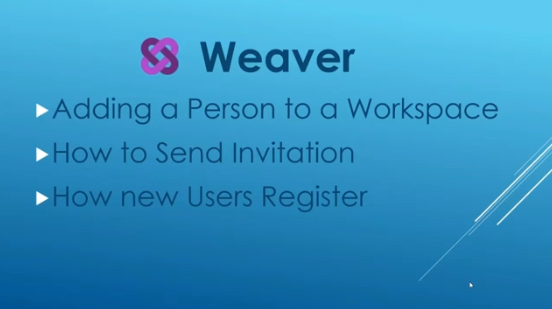 This is a short tutorial on Weaver once you have a workspace you'll want to include others into the workspace so that they can participate in the activities there so this tutorial covers how to add a person to a workspace how to send them an invitation which simplifies things for them and how new users register.

So this is a typical workspace and everything is controlled through the roles of the workspace so you see a list of roles on the right here members administrators and facilitators and circle administrators and they're checked for the roles that that you're currently playing and also you'll see the list of members at the bottom the role that is most important is the members role if you're in the members role then you're going to have access to the workspace and so now you're seeing all the people that have access to the workspace.

You control the roles with the roles tab over on the left. If you click on roles you'll see a list of all the roles and you'll see who's playing those roles at the current time along with a bit of a description aboutthe role. If you click on the role it will bring up the dialog box for editing the members of the role. In the four people that are there, if you start to enter someone who has already been in the system as you type three letters you'll see them listed down below. You can just pick them from from the list.

In this case we have a user that's never been to the system now he'll start receiving notifications when the meeting announcements go out and and when new comments are created and topics are created he'll start getting those bayi some eventually something will draw him in.

Sometimes it's nice to go ahead and send an invitation so you can do that by clicking on the icon here and you can look at his profile. You can remove him here. One can compose and send the invitation. Here it's prefilled with some text that you may want to put in there. You can change that. Once you've gotten the text that you want you click send invitation. Now it says it sent it so let's go take a look and see what that would actually look like to Charles.

Charles will receive a message that looks like this. Here's the text that I typed in but down at the bottom it's prefilled with some links this message has been sent to his email address. By the time he clicks on this link, we already know that he that this was delivered to his email. Click on the link so it's validated that he owns the account. So all he has to do is set up his name and enter the password like normal and he's set up. His account he's now fully enabled and he's brought right to the workspace. You can see he's a member. He's a member of the members role and he now has access to the workspace.

Here's what we saw as someone who owned a workspace I simply entered someone's email address I then sent them an invitation and then based on that email that they received they were able to click and access the workspace and set up their password and name in a single action. So it's really very easy to bring people into the workspace. You can do that multiple times. Go back to two roles. You can add any number of people at the same time. You do need to go out and click on send invite. If he loses the invite you can go ahead and send it again, no problem. You can send the invite as many times as you want to then until finally he hooks up and has access to the system. That's how you do it